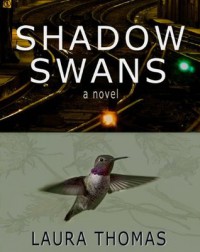 What a flair for words Ms. Thomas has. Ruby, the narrator, was so beautifully crafted as the rebellious outcast misfit, that despite the fact that she is nothing like me, I was able to completely empathize with her. The author was able to take a squalid and dingy setting, and without sugar-coating it (the descriptions of the filth and stench were quite vivid), managed to romanticize it.

Ruby goes about pretending to live a normal life, and one day when she decides to blow off work, she is accosted by Den, a resident of a hidden underground community. The two strike up a friendship, and while Den is unwilling to let Ruby show her the world above, it is just as well because Ruby is full of curiosity about Den's hidden world. When the two stumble upon secret government tunnels, they embark on what will be a life altering adventure for both of them.

The entire story was captivating, and the ending was particularly surprising. I thought I had a pretty good idea where she was going with her story, and although I was not entirely wrong, I was still caught by surprise.