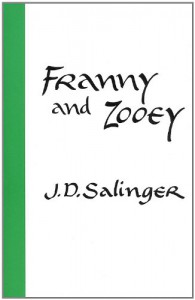 I was all set to give this book a 2 star rating, because I was really not liking it. But about 3/4 of the way through, there was a line about the attainment of wisdom through learning, and for some reason, that paragraph really resonated with me, particularly in light of the fact that 60 Minutes recently did a feature on David McCollough in which he mentioned the dismal state of learning in 21st century America. As I read to the end of the story, I found myself disliking it far less. Yes, Zooey comes across as a horrendously conceited and outspoken individual, but deep down, he truly cares about the well-being of his sister, Franny. It's just that he has such an abrasive personality that he is unable to keep his highly judgmental opinions to himself (the same way Franny was unable to stop herself from saying horrible things to her boyfriend in the opening chapter), and sadly Zooey's inability to censor himself only makes Franny even more distraught. Despite his backhanded way of trying to comfort her, I found their final exchange over the telephone to be quite tender.

Sadly, these two things which I did like did not come until the end of the book.

What I did not like about the book is that it too verbose and sooooo dialogue heavy. It read like a play. I do not like reading plays (yes, that does include Shakespeare). I like reading prose, beautiful, descriptive prose, which can conjure images in my mind. It's ironic that the few descriptions in Franny & Zooey read like lists (describing the contents of a medicine cabinet, as another reviewer pointed out, and listing the contents of a living room).

And now here is were I'm going to raise the ire of many here, but I also feel this book would have benefited from some serious editing. There is no reason for it to be 200 pages long. I don't know anything about Salinger, other than he was a recluse, so I don't know if he had a bullying type of personality who would have cowed an editor who wanted to change something he wrote and actually wanted published. The bathroom scene where Zooey's mother comes in to talk to him (which takes up a good chunk of the book) did not need to be nearly as long as it was. Rather than give the reader a blow by blow of every word they exchanged, I would have preferred a narrative which summed up the gist of what was said and gave us a better idea of what was going on in their heads.

My enjoyment of the last quarter of the book was not enough to completely overcome what I felt were its shortcomings, so 3 stars is all I can give it.